The Fall of the House of Usher 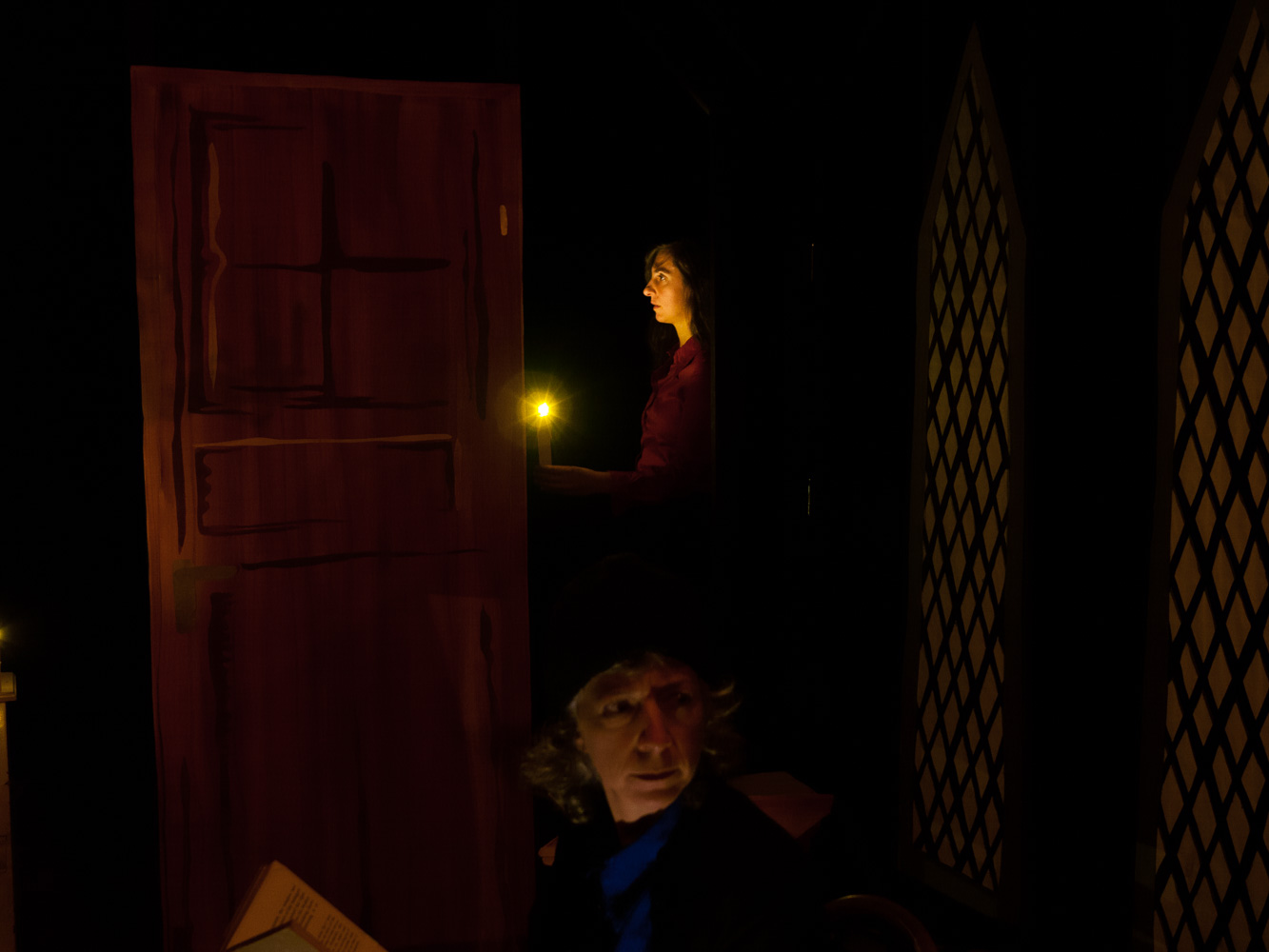 “The rarified air that we breathe in The Fall of the House of Usher is that of a dying world, prey to terror, guilt, fatality. Gripped, we follow step by step the narrator (Lindy Annis), who, responding to a desperate call from Roderick Usher (Nicholas Bussmann) finds herself absorbed into the meanders of a sick psyche. Hypnotized by the dark poetry of Edgar Allen Poe’s words, hammering out a whole lexicon of ruin, by the slow and sober diction of Lindy Annis, inexorably, with her, we slide towards the funereal basement in which lies the lifeless body of Madeleine Usher (Lucile Desamory). It is sideways that the narrator advances through the story, much as the noble donors in medieval paintings humbly kneeling before images of the Christ —here, Poe.
The Usher house, a somber and cracked aristocratic abode, is the matrix of collapse. Lucile Desamory has conceived a profound and shadowy decor in paper cut-outs, painted in gouache, that the eye doesn’t cease to interrogate: in a few touches, she has recreated an atmosphere that is tensely taut – the gothic enigma of the mansion itself. Her spectral apparition and the song she intones, as if from beyond the grave, powerfully translate the irresistible call of the after-life. As for Roderick Usher, we never actually see his face; back turned, he is a stooped silhouette, facing his harmonium. Nicholas Bussmann, who also wrote the music, bends over his instrument as if it were an extension of himself, pounding upon it like a sick lung. The music, as trembling as a last sigh, is determinant in the unease that grasps hold of the audience. For, thanks to the magic of the language, to Lindy Annis’s staging, at once sparse and vibrant, to this fascinating trio from hell, each giving body — Lucile Desamory with the decor, to Madeleine Usher buried in the house, Nicholas Bussman with the music, to Roderick Usher swallowed up by his own noxious soul; and Lindy Annis, a true actress of diction, who speaks a language both strange and sovereign, to the language—, forty short minutes suffice for the spectator to feel himself drawn, in turn, into the depths. The most astonishing, perhaps: from this darkness is born a jubilation. And yet, upon reflection, this joy is quite simply that engendered by a truly inspired performance.” François Jonquet

The Fall Of The House Of Usher has been performed at:
ausland Berlin
Muzee Oostende
Schaubühne Lichtenfels Leipzig

upcoming shows will be announced soon